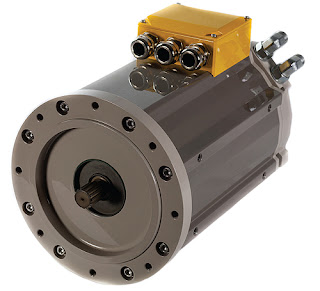 Parker Hannifin, the global leader in motion and control technologies, today announced that it is sponsoring Victory Motorcycles as they compete in the 2015 Isle of Man TT Zero Challenge on Wednesday, June 10. In addition to being a marquis sponsor, Parker’s race-proven, high-performance Global Vehicle Motor (GVM) PMAC electric motors have been selected to power Victory Racing’s prototype electric race bikes.

This competition, taking place on the Irish Sea island, is one of the most demanding races in the world for electric motorcycles. It involves one lap around the island’s 37.73-mile Mountain Course.

“Parker is thrilled to be participating with Victory Motorcycles as they battle for the trophy,” said Jay Schultz, Parker’s business development manager for vehicle electrification. “In order to improve their chances of winning, we needed to focus on delivering the power density to be capable of producing up to 175 horsepower out of this compact, 8-inch-diameter-by-5-inch-long motor, while providing the efficiency to have the motor help the battery last the entire 37.73 miles of the race. It is very challenging because this is the longest electric motorcycle race in the world. Your battery pack has to last through very high average speeds, approaching 120 miles an hour. Plus, near the end of the race, they have to go up and over a mountain to reach the finish line.”

Competitions are nothing new for the GVM motor. Since 2012, Parker has been supplying GVM motors to power all-electric motorcycles for other competitions—including Daytona International Speedway, which is also an extremely demanding track that pushes components to their limits. The GVM product has evolved through the experience and lessons learned on the track, inspiring Parker engineers to examine many facets of motor design, including the cooling system, the type of magnets used and increasing the peak torque. These efforts have resulted in several patentable design characteristics of the GVM and created a durable, powerful motor for electric and hybrid vehicles.

“The entire Victory team is excited to make history with this effort,” said Rod Krois, Victory General Manager. “We know that [professional rider] William Dunlop’s experience and the continued Victory Motorcycles development of this electric race bike through work with Parker will propel us into a strong future with electric motorcycles.”

“Victory Racing selected the Parker GVM series of internal permanent magnet AC motors to power our prototype Victory electric race bikes based on the strength, flexibility and reliability of these motors. Parker’s GVM series of motors allowed us to select an ideal motor configuration in both length and diameter and then fine tune the winding to meet our specific performance requirements. This level of flexibility, added to the fact that the motor can be provided as a ‘kit’ for assembly into our own custom developed housings, made the Parker an ideal fit for our racing bikes, and provides one of the most power dense EV traction motors available,” said Josh Katt, Victory Motorcycle Product Manager. “We also appreciate that the Parker GVM series is manufactured in the USA, and that their team provides unrivaled engineering support for custom traction motor development.”