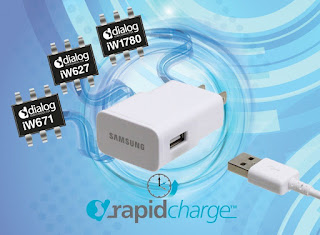 The small, lightweight Samsung adapter has a USB output connector and is designed for use with the Galaxy S6, Galaxy Note 4 and later models of the Galaxy S and Galaxy Note series smartphones. It typically charges the batteries from 0 to 50% in 30 minutes. The power supply can also charge other devices over a micro-USB cable, delivering 5 volts at up to 2 amps.

Analyst IDC predicts smartphone shipments will reach 1.44 billion units in 2015, growing to 1.9 billion units by 2019. According to the analyst, Samsung held a market-leading 21.4% share of the smartphone market in Q2/2015. Smartphones are often sold together with AC/DC adapters but there is also a growing market for standalone adapters that can be used to charge a variety of devices over USB.

Three complementary Dialog power management devices are used in the adapter. The iW1780 primary-side digital controller incorporates Dialog’s patented SmartDefender™ advanced hiccup technology, preventing excessive heat build-up and damage when soft short circuits occur in the charger cable or connectors. This results in safer, more reliable rapid charging. The iW627 secondary-side regulator communicates with the iW1780 AC/DC controller to determine the optimum voltage/current at every point in the charging cycle. Finally, the iW671 synchronous rectifier replaces the secondary-side Schottky diode of a conventional design with a MOSFET and uses proprietary adaptive turn-off technology to boost efficiency to over 88%, reducing the heat generated within the adapter and enabling a smaller case to be used.