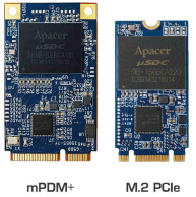 Since the PCIe SSD was adopted by Apple as a standard accessory in MacBook Air in 2013, its excellent flash storage performance featuring high-speed transmission has led the competition to follow, including the fully PCIe SSD-supported Microsoft Windows 8.1 operating system and the new generation Intel CPU chip. According to a survey conducted by the global market research firm TrendForce, the transmission speed of PCIe G2 (PCIe Generation 2.0) surpassed that of SATA III SSD in 2014. Moreover, several high-end notebooks are expected to replace SATA III SSD with PCIe SSD since Apple and Microsoft are boosting the market demand. With the price gap between them shrinking, PCIe G2 will potentially become the mainstream specification in the PC SSD marketin 2015.

As a quick response to market demand, Apacer launches two PCIe-interface products, including an mPDM+ and an M.2 PCIeSSD. The mPDM+ is a mini PCIe SSD with the dimensions in line with that of mSATA products. The 50.8x29.8mm size can be a perfect substitute for the storage device of mSATA attached to the motherboard. M.2 PCIe SSD, on the other hand, is about 40% smaller than the mSATA SSD module in dimensions of only 22x42mm. As M.2 SSD module has been included in standard interface, and supports both the transmission signals from SATA and PCIe. PCIe boasts transmission bandwidth and speed far beyond that of SATA, achieving higher transmission efficiency than that of SATA 6Gbps. With high compatibility, both these two PCIe SSDs match AHCI (Advanced Host Controller Interface) and have up to 128GB capacity, which ensure their competitive edge.

Jeff Lin, Embedded Application Business Unit Director of Apacer, indicated that, “Our mPDM+ SSD adopts Mini PCIe module, boasting a read speed of 385 MB/sec through the transmission of Gen2x1.As its dimension goes in line with that of mSATA products, it is currently a pain-free upgrade solution directly replacing the storage device of the original mSATA SSD on the motherboard.” But the M.2 PCIe SSD is undoubtedly the first choice in terms of both high-speed transmission and compactness. “The newly launched M.2, i.e. the NGFF (Next Generation Form Factor), adopts PCIe 2.0 interface which has a broadband speed up to 10Gb/s compared to PCIe 1.0. In addition, the additive transmission efficiency of Gen2x2 enables the sequential read speed up to 780MB/sec, far more efficient than the theoretical 600MB/sec transmission performance of SATAIII. High-end applications such as network storage or enterprise servers are thus capable of faster transmission,” Jeff Lin further explained.

Apacer has more than ten years of experience in the SSD market. According to a 2013 Gartner Report, Apacer was named top global industrial SSD supplier for consecutive years, as well as one of the few Taiwanese manufacturers with software, hardware and firmware R&D capacity.The firmware and major components can be fixed right after customer’s recognition and validation. This reduces the risks of out-of-stock and compatibility issues by providing customers with stable supply and high reliability. For that reason, Mini PCIe SSD and M.2 PCIe SSD have successively passed international OEM vendors’ strict tests and have 100% gone through rigorous environment tests (extended temperature and high/low pressure testing for longer periods of time) and motherboard tests. The latest samples are now available for customers to run test. For more details, please feel free to contact local Apacer sales representatives.