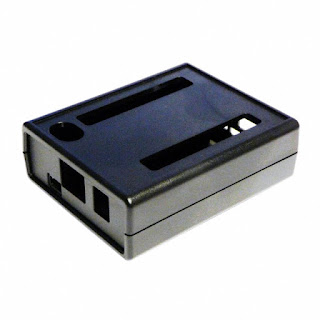 Hammond Manufacturing’s design-specific molded enclosures support the new types of credit-card-sized, low-cost bare-board computers, which typically run Linux and provide basic functionality across a wide range of applications. Although broadly similar in size and shape, there are inevitable differences in the positioning of I/O, power, and expansion ports on each design. Hammond’s enclosures, derived from its popular 1593 family, are available in translucent blue, grey or black, and each version is configured for the particular design of board, with machined slots, cutouts, and apertures in the cover and end panels. In some variants, the covers are molded with the required access points. The new format of development boards are aimed at both professional developers and hobbyists.

Initially, the supported computers are the Arduino™ Uno, Due and Mega, the Beaglebone and Beaglebone Black, and the Freescale Freedom. Enclosures for the Arduino Tre and Intel Galileo are in development and will be available soon. In such a fast-moving environment, new versions are regularly being added to support additional development board designs as they are introduced.

The enclosures provide good protection for the board themselves, and have dedicated access positions for external connectivity such as Ethernet, USB and serial ports.

Hammond Manufacturing has developed a new moulded enclosure specifically designed to house the Raspberry Pi Models B and B+. The 1593HAMPI’s are available in translucent blue, clear, grey, and black. The enclosure features a stylish rounded design with cut-outs for all the I/O interfaces and supported accessories. The Raspberry Pi board simply clips into the base. A catch secures the assembly and allows the case to be easily opened if required.