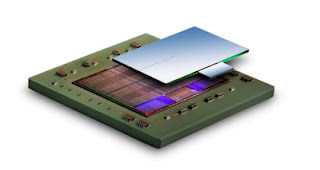 Using SSI technology enables Xilinx to deliver not only high-capacity devices built on TSMC's 28nm high performance/low power process, but also an unprecedented number of transceivers for unmatched system performance. Competing monolithic FPGAs are able to integrate only a fourth of the number of 28 Gbps channels. The heterogeneous implementation of Virtex-7 HT devices also enables Xilinx to make independent technology choices for the core FPGA and 28 Gbps transceiver die, which avoids burdening the FPGA with high leakage transistors that waste system power and bring no benefit to computation tasks. Having 28 Gbps transceivers on silicon separate from the core FPGA fabric further allows for superior noise isolation, enabling best overall signal integrity and system margin, as well as improved productivity for design closure and faster time to market.

"We were impressed by the low transmit jitter of the Virtex-7 H580T device's 28 Gbps transceivers and also by how quickly we were able to bring up a functioning link when combined with Luxtera's 4x28 Gbps single chip silicon photonic transceiver," said Chris Bergey, Vice President of Marketing at silicon photonics leader Luxtera Inc. "Xilinx has clearly hit an industry milestone with this device because it allows makers of networking systems to easily overcome the challenges they face to enable more bandwidth."

"With eight 28 Gbps transceivers and ample logic capacity, the Virtex-7 H580T device is the only FPGA that can integrate additional line card functionality so that designers can implement a dual 100G OTN transponder on a single chip," said Mark Gustlin, System Architect for Wired Communications at Xilinx. "Competing ASSP-based solutions will comprise five devices, will remain unavailable for more than a year, will consume at least 40 percent additional power and will cost 50 percent more."

Virtex-7 HT devices with their 28 Gbps transceivers allow support for up to four IEEE 100GE gearboxes in a single device with the option of integrating advanced debug capabilities, OTN, MAC or Interlaken IP within the same FPGA, eliminating the need for separate gearbox and ASSP devices. The upcoming Virtex-7 H870T device is also 400GE ready and will be able to support future 400GE modules that require16x25 Gbps interfaces. The result is reduced overall power and BOM cost and a more flexible solution in the midst of changing protocols.