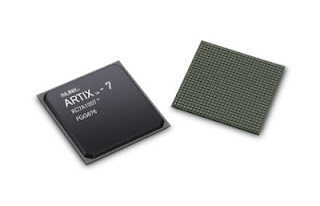 Xilinx, Inc. (NASDAQ: XLNX) today announced first shipments of its Artix™-7 Field Programmable Gate Array (FPGA) family. The new devices extend the reach of FPGA technology to applications requiring performance capabilities traditionally served by Virtex® FPGAs, but the form factor of small, low-cost programmable devices. Makers of portable medical, hand-held radio, and small cellular base stations – and a host of other professional grade applications that sit at the edge of their respective technology infrastructures – can now leverage high-end All Programmable FPGA capabilities to a growing number of products and expand their markets.

For builders of microwave backhaul equipment supporting 4G rollouts around the world, Artix-7 devices enable developers to integrate modem and packet processing functions on a single device and have the highest performance per watt for delivering intelligent bandwidth. In a market where the 'Holy Grail' is a base station on a chip, Artix-7 devices give equipment manufacturers unprecedented levels of integration as well the programmability necessary to compete where market growth is out pacing standardization.

In Xilinx's two newest videos, Artix-7 devices demonstrate the capabilities for DSP applications and the ultra low power characteristics of the family. These videos, a new white paper and other resources can be found on Xilinx's Artix-7 web page.