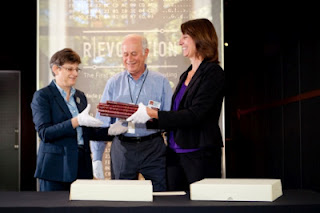 The Computer History Museum (CHM), the world's leading institution exploring the history of computing and its ongoing impact on society, announced today its acquisition of more than 1,000 engineering notebooks originating from the pioneering Silicon Valley company Fairchild Semiconductor.

Texas Instruments (TI) donated more than 115 boxes containing the historic records and other materials that recorded ideas that led to the planar process for integrated circuits (ICs) and the rise of Silicon Valley as a world center of technological innovation. TI acquired the documents in 2011 when it purchased National Semiconductor, which had owned them since its purchase of Fairchild in 1987.

"These rare, historic notebooks contain the work that paved the way for 'Moore's Law,' the explosive growth of electronic computing and the foundation of the switched-on world we live in today," said John Hollar, Museum President and CEO.  "We are proud to ensure they will be preserved for and presented to future generations, and we are enormously grateful to TI for its generosity and vision in making this gift."

Fairchild, one of the pioneering technology companies in Silicon Valley, was founded in 1957 by Gordon Moore, Robert Noyce, Jean Hoerni, Julius Blank, Eugene Kleiner, Victor Grinich, Jay Last and Sheldon Roberts.  The history-making contribution of Fairchild's founders was the development of the planar process, a technique that enabled the high-volume production of integrated circuits. Planar technology improved the reliability of  all semiconductors  and revolutionized the science and manufacturing of microelectronics.

"Because Texas Instruments has a long, rich history of innovation, we recognize the importance of these documents to the history of the Silicon Valley community," said Dave Heacock, TI senior vice president and manager of the Texas Instruments Silicon Valley Analog (SVA) business unit.  "We've long honored the role TI engineer Jack Kilby played in our industry's history and recognize that other pioneers' contributions helped realize the commercial value of that technology.  This history has come together through TI's acquisition of National Semiconductor.  This donation is being made in honor of all our industry's pioneers and the tens of thousands of engineers everywhere whose work is making our lives better today ."

The notebooks represent an almost day by day account of the work of Fairchild scientists and engineers who developed the planar technology and designed early working models in the late 1950s and early 1960s.  Included in the collection are early Jean Hoerni illustrations and conceptions, as well as early notebooks from Robert Noyce, Gordon Moore, Andy Grove and Jay Last.

Dag Spicer, the Museum's Senior Curator, said, "These notebooks describe the painstaking and creative approach Fairchild scientists and engineers took to solving problems in semiconductor design and manufacture.  They are cultural treasures that record a true inflection point in human history."

Processing the notebooks will take place over the next several years by the Museum's curatorial and archival staff.  Their content will form the basis of future exhibitions, publications and education programs at the Museum.