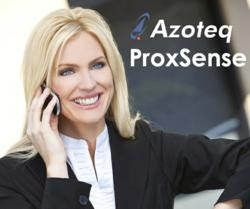 “The next advance in touch technology is the addition of proximity technology which requires a sensor 100 times more sensitive than existing solutions and Azoteq is first to introduce a single chip solution”, said Dr. Frederick Bruwer, CEO and President of Azoteq.

“The IQS128 is the first device to offer a solution to meet FCC SAR (specific absorption rate) requirements for cell phones and tablets to reduce RF power when the device is in close contact to a human” said Kobus Marneweck, VP of Marketing. “The ProxSenseTM family now has over 20 products”, he added.

Significant savings can be realized compared to electro-mechanical switches and the IQS128 offers the added advantages of electrical isolation and unlimited operation. A touch pad can be realized with a simple pad on a PCB and easily projected through a variety of dielectric materials. The IQS128 can be used to implement a triple action switch - an approaching finger wakes the device, a light touch selects a first function and press selects a second function.

The IQS128 is specifically aimed at proximity handheld detection in tablet PC’s, on-ear detection for mobile phones and other proximity applications. The capacitive technology holds advantages of very low power consumption, omnidirectional sensing and does not require an aperture lens.

January 05, 2016
TURCK is now offering the option to completely shield M8 picofast ® cordsets by connecting a braided shield directly to the coupling nut. This provides a cost-effective and reliable connection with 100 percent cable and connector shielding, which protects against electromagnetic and radio frequency interference. The 3 and 4-pin cordsets are available with flexlife ® PVC or PUR jacketed cable. All connectors deliver IEC IP 67 protection. The M8 picofast line, like most TURCK cordsets, provides male or female, straight and right angle connectors, standard and custom lengths, and pigtails or extensions. Fully encapsulated mating receptacles are also offered, completing the system.
Read more