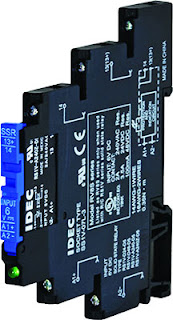 IDEC Corporation announces the addition of the RV8S solid state interface relays to its existing RV8 DIN rail product line. The RV8S features 100mA to 3A switching capability in a compact 6mm wide space. Other leading RV8S features include high switching cycles, extended operating life and high-speed load switching. A common application is as an interface device between a PLC or other controller outputs and a load with high power requirements.

The RV8S can switch loads up to 240 VAC, and it has passed 100K cycles of UL Extended Endurance testing. Common uses of the RV8S include general load switching in control systems for assembly machines, solenoids, molding machines, and other applications requiring a high repetition rate.

The RV8S has operate and release times which are much faster than electromechanical relays. Depending on the specific model, the operate time is as fast as 40µsec with a 200uS release time. The relay also generates no acoustic and far less electrical noise than its electromechanical counterpart because it makes use of semiconductor outputs instead of electrically sparking contacts.

The RV8S requires much less power to operate, about 5-10 times less than an equivalent electromechanical relay. This is particularly important when the relay is driven by a PLC or similar discrete output, as these types of outputs are often low power.

The RV8S is suitable for DIN-rail mounting, and has appropriate UL/c-UL and CE ratings. It also has IP20 protection, and can safely operate in temperatures from -20 to 60ºC and humidity from 5 to 85%. The RV8S supports flexible wire termination options, including screw terminal and spring clamp models.

The RV8S is available for 24 Vdc, 48 Vdc and 240Vac input voltage applications, with output voltage ranges of 0-24Vdc, 0-48Vdc and 24-280Vac respectively. The 24-280Vac output versions are available in random or zero-cross models. The switching configuration for all models is single-pole, Normally Open.