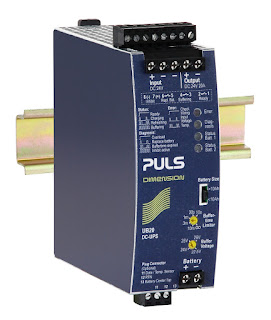 General power outages or unexpected shut-downs can cause damage and high costs in control systems. This can be avoided by using a DC UPS. In the DIMENSION UB20 series, PULS offers a new DC UPS for universal use for output currents up to 20 A. The unit, only 46 mm wide, can be used with batteries between 3.9 Ah and 130 Ah and is thus suitable not only as short-term back-up power for controlled shut-down after a power outage, but also as emergency power feed until the fault can be rectified by the service staff. In contrast to conventional DC UPS, the buffer voltage of the UB20 can be set between 22.5 V and 26 V and thus the unit is also suitable for systems which are sensitive to voltage fluctuations.

Two series-connected 12 V batteries, which are individually charged and monitored, are used as back-up power. This enhances the life of the batteries and avoids the need of matched batteries when a replacement is necessary.

The UB20 is self-explanatory, easy to operate and has extensive battery diagnostics and many protective functions installed. The output of the DC UPS is decoupled from the input. Load circuits can therefore be split very simply into buffered and unbuffered branches. The energy of the battery can thus be used selectively.