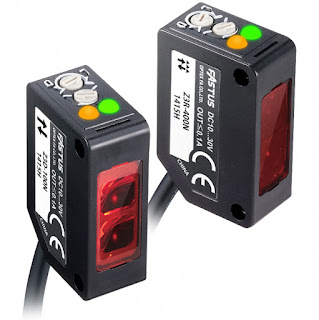 The new Z3 series of photoelectric sensors is the next evolution of the globally acclaimed Z series of sensors. With the longest in-class sensing distance of 25m, the Z3 series includes a built-in amplifier that greatly improves detection performance and yet retains its ease of use and affordability.

The Z3 series through-beam type sensor has a 25m sensing distance, the longest in its class. This high power provides a significant increase in excess gain, which helps the sensor overcome interference from dust or other fine particles. The Z3 series also provides easy optical axis adjustment thanks to its large spot size with good visibility. Its four element LED also helps reduce beam degradation during long-term use.

The output and stability indicator lights are brighter than conventional models making them easily viewable from any direction.

The diffuse-reflective type features an optimized optical receiver system that minimizes the dead zone in front of the lens. This makes it easier to detect objects with a low reflectivity that pass close to the sensor, even objects with varying heights.