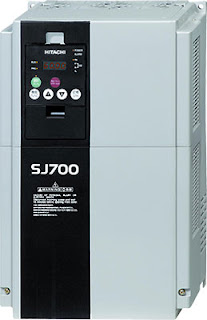 Hitachi America, Ltd., Industrial Systems Division, today announced the introduction of the high-capacity SJ700 Series of inverters. The SJ700 extends Hitachi’s model range up to 500 hp, and significantly expands on the performance, capabilities and functions of the SJ300. Three models, 250 hp, 400 hp and 500 hp are being released at this time. The SJ300 remains to cover the range from 200 hp and below.

Another noteworthy enhancement in the SJ700 is Hitachi’s Easy Sequence ( EzSQ) built in programming function. It’s like having a Industrial Control System (PLC) built into the inverter. In many cases, the need for a separate PLC can be eliminated. The program is developed on a PC, and then downloaded to the inverter using the simple-to-use EzSQ software provided at no charge.

As if those improvements were not enough, Hitachi has packed other new features into the SJ700, such as patented Micro Surge Voltage suppression (to protect the motor winding insulation), advance trip avoidance functions, configurable sink/source logic on I/O, and much more.

The SJ700 also has features you’ve come to expect, such as built-in RS485 Modbus/RTU communication, and options for other communications networks, such as Ethernet Modbus/TCP, DeviceNet, Profibus and LonWorks. The SJ700 can be configured via the front-mounted keypad or using Hitachi’s ProDrive PC-based software.

A global product, the SJ700 carries CE, UL and c-Tick marks, and is RoHS compliant.