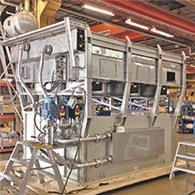 Water cooling (CACW) offers the best generator efficiency, but it can only be used if there is a separate cold water supply on-site. The new CAWA cooler is designed for demanding applications such as oil and gas platforms, where cooling water is not available or space limitations are a key issue. It integrates an additional water-to-air cooler on top of the generator’s air-to-water heat exchanger, providing an independent closed circuit water cooling system.

The CAWA cooler consists of three sub-systems: the Machine Cooler which cools down the internal air in the generator, the Air Blast Cooler, which has six fans to cool down the water coming from the generator’s Machine Cooler, and the Piping System that circulates the cooling medium (ethylene glycol / water mixture) between the two cooler units.

The cooler comes in two versions, standard for safe areas and premium for ATEX certified Zone 2, ExnA requirements for potentially explosive atmospheres. The separately delivered cooler weighs a maximum of 4,500 kg in total - considerably less than a comparable air-to-air cooler, which typically weighs 7,500 kg and it requires no additional piping. ABB has patent protection pending for the CAWA cooler concept.