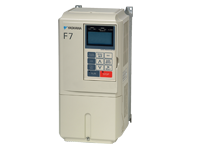 The spinning line extrudes nylon and polyester filaments from melted resins. Before the upgrade, motor and drive efficiency was about 50%. Part of the production line used an uninterruptible power supply (UPS) meant for protection from power outages, but the UPS ran at 80 to 93% efficiency at best.

One outcome of the inefficiencies was that the old equipment produced enough heat to demand its own a/c system. Elevated temperatures led to more breakdowns and repairs.

The new variable-frequency drives, Yaskawa F7 and G7 ac VFDs, have a nominal 98% efficiency. They create so little heat that ENKA was able to remove nine a/c units formerly needed to cool its factory. The new ac motors are also smaller than the dc motors they replaced. Old electrical equipment and a/c required for the spinning line took up almost 3,500 ft2. The new a/c-less electrical installation occupies only 1,163 ft2, And the updated UPS relies heavily on battery banks and works at near 100% efficiency.

Yaskawa VFDs were installed in a common-bus configuration, so a drive that is slowing its load can provide power to drives that need it. This reduces the power drawn from the mains.

In addition, the new VFDs let certain machines turn out up to 18 different filament types simultaneously with little modification.

The combination of energy saved from using more-efficient equipment, eliminating a/c, and introducing regenerative braking works out to $806,131 in annual kilowatt-hour savings. ENKA also figures it saves about $77,000 annually on technician time because of the new gear. All in all, payback time for the new installation was less than a year.