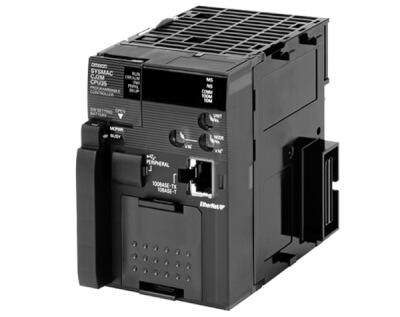 OMRON Corporation (TOKYO: 6645, ADR: OMRNY) today announced the release of three new products, the SYSMAC CJ2 programmable controller, EtherNet unit for CS/CJ series and CX-One FA Integrated Tool Package version 3.0, to markets. All of these products support EtherNet/IP for industrial use. The Company also announced the release of NS-series NS-V2 programmable terminals that have been upgraded to support EtherNet/IP. These products help to reduce the TCO in designing and developing production equipment for immediate startup with quick delivery, as well as equipment that requires greater complexity and higher speed in control operations. Products released today include the following models:
With current international competition, manufacturing sites for key production industries, such as automobiles, semiconductors and liquid crystal and plasma displays, demand 1) immediate equipment startup with large capital investment in the first period, 2) fast additions and changes in production models, volumes and line compositions after the equipment is in operation, and 3) meeting traceability and other global requirements for quality, safety and environmental needs. These demands require even greater amounts of quality data along with faster accumulation and processing of production management data.

Manufacturers of special equipment and machinery must flexibly respond to these rapid changes, cope with the increase in management data resulting from improved device functionality and performance, and achieve control with greater performance and accuracy with more precise production processes. These manufacturers are actively introducing control devices for open networks, standardization and specifications that allow the development of control systems with greater speed and precision and enable stable worldwide product procurement.

All the new products marketed by OMRON support EtherNet/IP, a global standard industrial protocol promoted by the ODVA.2 In addition to the convenience of universal Ethernet, EtherNet/IP can be used for both information and control networks. Data links are faster (30 times faster, according to OMRON’s own research) and the data communications capacity is larger (nine times the capacity, as above). These features make the products ideal for production equipment that will require increasingly larger capacity and higher speeds in the future.

The SYSMAC CJ2 CPU units feature large capacity and a built-in EtherNet/IP-compatible multifunctional Ethernet port. The program capacity of 400K steps is 1.6 times the capacity, while the 832K words of data memory is twice the capacity of previous OMRON products. In addition, the CJ2 CPU units are ideal for devices that require high speed and high precision with both faster speeds for executing special instructions, such as overseeing processing and floating-point math, and increased speed for immediate refreshing of basic I/O.

Also, less design time is required because PT screen data and PLC programming can be developed in parallel with improved tag access through EtherNet/IP for full access to memory in the CJ2 CPU unit from an NS-series programmable terminal.